In late 2008, I began blogging about poets who had smitten me with their magic, poets who compelled me to make my own desk confess all that it knew and all that it didn't know: Larry Levis, Philip Levine, Yusef Komunyaaka, Stephen Dunn, Gerald Stern, Michael Waters, Alicia Ostriker, Carol Frost, Malena Morling, Kim Addonizio, Dorianne Laux, Li-Young-Lee, and dozens more. These were the poets to whom I had returned when I found my own work waning.

Little did I know when I began writing my blog that I would meet scores of additional poets along the way--both in print and in the flesh--that would widen the spell that was cast upon me as an undergraduate student more than four decades before, listening to William Stafford read one spring evening in Las Cruces, New Mexico.

It is to Keith Wilson, my first poetry mentor who introduced me to Stafford, as well as to the growing community of poets, living and dead, who continue to inspire me--poets like Peter Campion, Spencer Reese, Matthew Dickman, Suzanne Buffam, Ilya Kaminsky, Joseph Millar, David Groff, Matt Mauch, Larry Eby, and others too numerous to name--that I dedicate my own efforts as I "stare at the whorled grain of wood in [my own] desk / I'm bent over until it's infinite." They are the ones who help me "make it talk, make it confess everything." 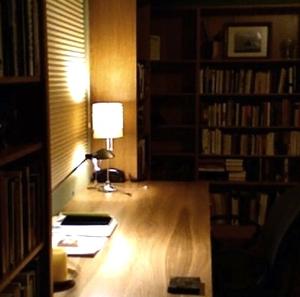